We have collected some points of thought from Thierry Bisch, painter, animal portrait painter and fierce defender of biodiversity, as part of his exhibition “Tous vivants” at Les Grands Chais Monégasques (exhibition visible in Monaco from April 28, 2022),

Thierry Bisch, you are continuing your fight to safeguard biodiversity, are there reasons to be optimistic in 2022?

The reasons for optimism are dwindling as successive IPCC reports appear. The collapse of biodiversity is directly linked to the inexorable expansion of the human species, the overexploitation it makes of resources, the overconsumption which leads to the destruction of the natural habitats of wildlife, insects and all the living on this planet. Sapiens has always acted this way, paleosociology has highlighted its predatory behavior since the Neolithic era. However, there are still some reasons to hope, a recent study reveals that world demography, particularly in China and India, is on a decreasing curve…

It emerges from your drawings as a powerful serenity in the animals that you paint or draw, is this the very nature of these or is it the painter’s touch that highlights this?

Before painting animals, I spent ten years representing the human figure and more precisely portraits of children. As with animals, what interested me was beyond physical appearance or anatomy. What really interests me is to try to represent the questioning, formerly with children today with animals, the subject is only a pretext to talk about something totally different. I therefore put the maximum of effects in the intensity of the gaze so that the observer is instantly caught up and starts to feed his own questioning.

What triggered this desire to put your talent at the service of the ecological cause?

I had a shock in 2008. Before drawing or painting on a subject, I like to document myself, on its taxonomy, its habitat, its eating habits, its behavior, in short, do a little ethological work. I then noticed that most of my subjects were threatened with extinction! I discovered the red list of the IUCN (International Union for the Conservation of Nature) graded by nine stages in the state of conservation which go from “least concern” to “extinct” going through “endangered” or “critically endangered”. My subjects were almost all at the top of the list, I was flabbergasted! Something had to be done but I didn’t know what with my small means. My work then took a definitively committed and militant turn, until then I painted animals, I started to paint their disappearance…

You are someone special in the contemporary artistic world who is more oriented towards abstraction and pop-art, how do you think you will be perceived by your colleagues?

I don’t have a clue how I’m perceived by people in the business and quite frankly, I don’t care. I have no other ambition than following my path, day after day trying to improve myself, I do not try to please everyone. As Oscar Wilde so aptly said “Be yourself, everyone else is already taken”

This is not your first exhibition in Monaco, it seems to me. What was your background here?

This is the second time that I have exhibited in Monaco. My works have been shown here in different galleries for years but this is the second time that I have created a coherent series to support a commitment, to illustrate a theme that is dear to me. In 2016 I joined forces with the Prince Albert II Foundation, and we unveiled around twenty large canvases in the Principality which showed animals in the process of being erased; the event was called “Delete?” and coincided with the tenth anniversary of the creation of the Foundation, which, as you know, is very committed to the fight for the preservation of biodiversity, in particular by creating MPAs (Marine Protected Areas). This year, the exhibition is called “All Alive!” a questioning of our relationship to the non-human species with we all share this planet. The idea of ​​showing only drawings came from my historic dealer, Didier Viltart. In 2021 I brought him to his gallery in Saint-Jean-Cap-Ferrat a dozen of drawings that I did during lockdown. I was then in full questioning what I was going to do after more than 100 large oil paintings on the theme “Delete?” theme and what better in these moments of hesitation than to go back to the beginning, to the base: Paper, pencils and nothing else…

What is your relationship to animals?

A very intimate, philosophical and permanent relationship. I live with my eldest son, also a painter, and two cats in our big house in Blaye in Gironde. Isaac & Leïla are full members of the family, like children we owe attention and protection. Animals are gifted with cognitive faculties like humans are, they can be happy or sad, they suffer or show you affection, empathy, although their modes of communication are different from ours. My questions led me very naturally to vegetarianism and the more I learn about environmental issues, the more I realize that intensive farming and meat-based diets are the main lever for drastically reducing our carbon footprint generated by greenhouse gases. Abandoning this practice could solve all our problems in record time. 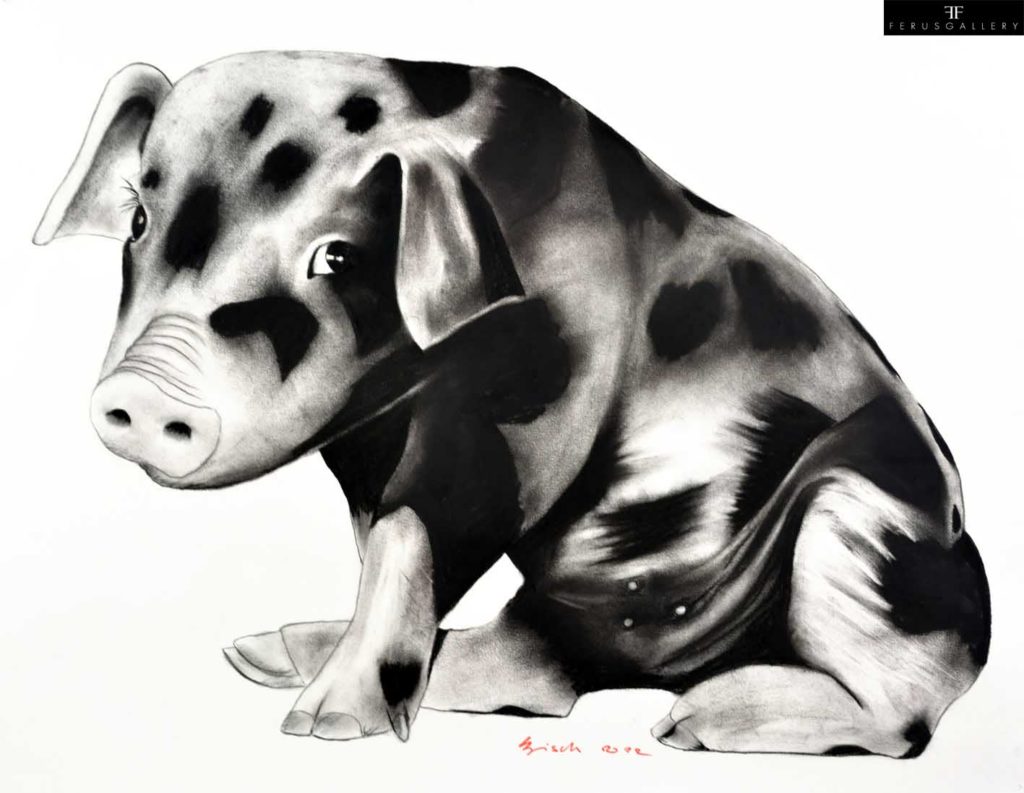 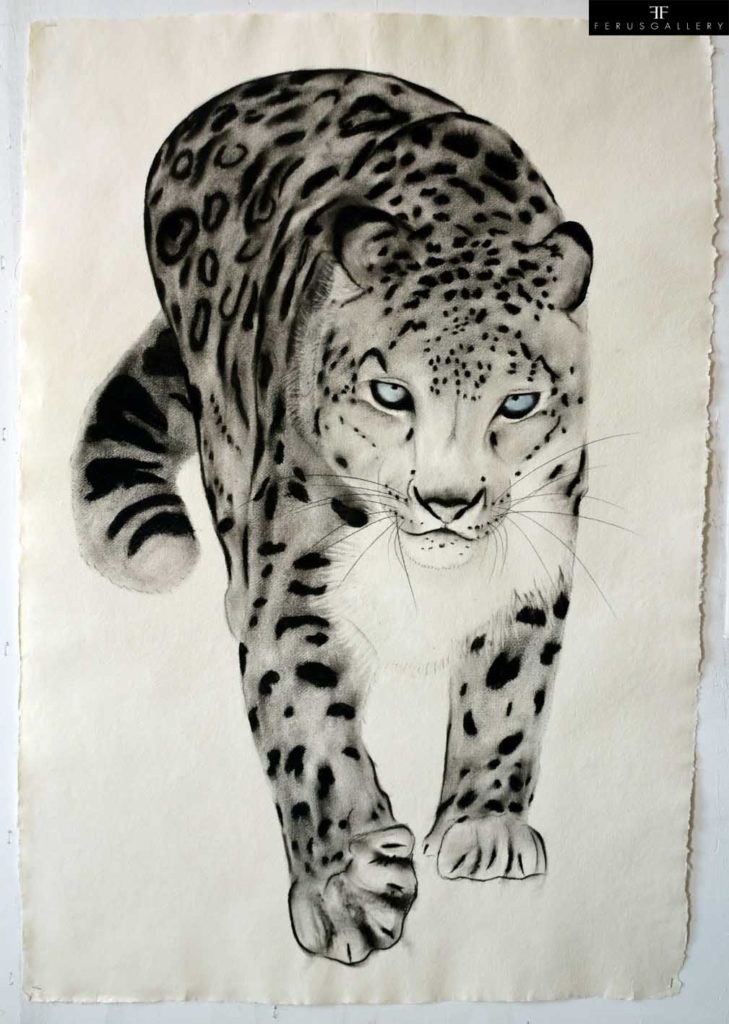 Once 2 drawing by Thierry Bisch 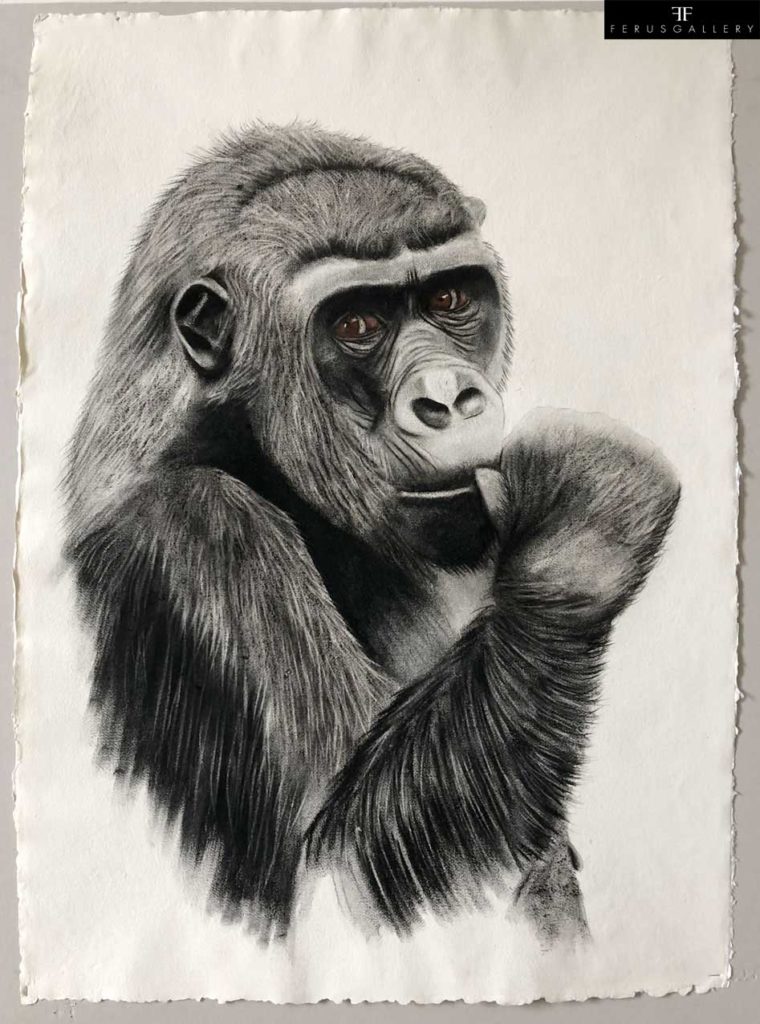 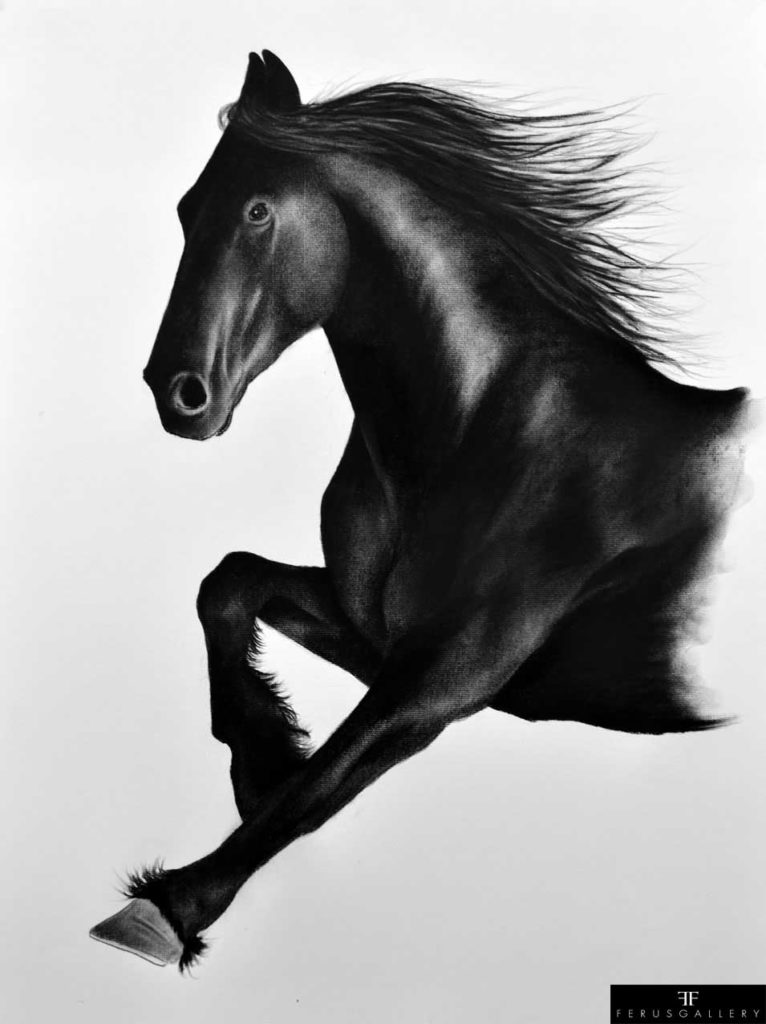